I was issued a challenge.

I've been asked to produce a story and a storyboard for a cartoon, before the end of August.

It came from a question about what it is, specifically, in cartoons and animation, that I enjoy the most, or that I'm the best at.
I found it a difficult question to answer, honestly. I'm fascinated by the whole process of making cartoons. I can't say I'm more interested in any part of it over the other.

As for what I'm the best at, I think my strongest skills cover more than one specific role in the production of an animation. I think my drawing skills are really improving recently, but it's a fundamental skill to the whole process of animation.

We settled on the aspect of story creation and storyboarding. I'm quite comfortable coming up with stories, and I really enjoy trying to find the right composition, or action to communicate that part of the story. In fact I really love trying to find just the right way to express these things, no matter what that expression is. And how to represent it realistically is an additional challenge which makes it all the more satisfying.

So, my challenge is to make a story, and then draw the storyboard to the best of my abilities, to become a portfolio piece.

So here's a basic walk cycle.
I was pleasantly surprised that when I looked back on this today, it didn't seem as bad as I thought, so I'm going to share it.

Apologies for the frog not walking on the spot!
It walks a lot quicker than I expected from the previews in photoshop, whew. It could even do with being slower, perhaps.

I'm working on a second one. I'm really trying to be disciplined with the volume of the character and the consistency of the lines, to avoid that low-quality feel. I can't wait to show it when I finish the next one!

Edit: I realise why it was going so fast - I was meaning to render it out on twos, each frame showing twice. Well, I've rendered it now, but it's become interlaced! Still more to learn. 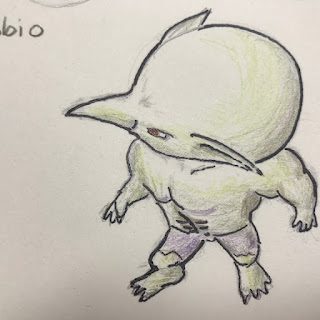 It's the Gainz Goblin. I'm hitting the gym these days and this word, and this idea, came into my head. It's relevant, though - bear with me.

I'm really enthusiastic about the other project I've been working on - Geggle Makes a Potion - to give it a working title. I really want it to be a stand-out piece of work I can be proud of. However, I mustn't allow my own enthusiasm to get the better of me. I mustn't let it become a Gainz Goblin and leave me with an empty shell of a cartoon.


"The thing you are going to build on must be basic... It's the thorough understanding of the basics that produces real sophistication."

That's a quote from Richard Williams' Animator's Survival Kit (p.46). And that's what I need to do. I need to prove I can do the basic things before I continue. I don't see any other way to continue with the project. I need to make some basic things, walk cycles, picking things up, etc, so I know I can do them when presented with such things in a story.

Anyway, this means I can get going and animate some stuff!
Posted by Tobias at 15:13 No comments:

Sketch: Geggle with a fireball

A picture I drew sitting in a cafe - the same frog fellow, Geggle, marvelling at a fireball he made.

Normally, cartoon characters aren't that competent and he's likely to burn himself in a moment. 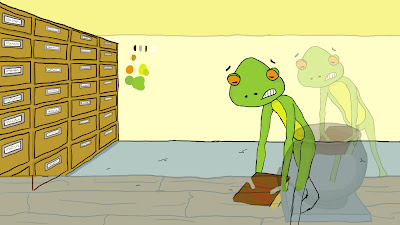 I've been working on something 2D for the past few months. It took a while to get anywhere that I'd feel comfortable showing as progress - lots of time designing the character, thinking of stories (but at least I have an idea for another episode with this guy!), and making storyboards, but I finally made the dive and started drawing on the computer. I'm really happy with drawing digitally at the moment. It's been easier than I remember getting used to the tablet, and sketching things out, erasing, fiddling with the brush thickness settings, the things I was worried about, are actually quite straight forward.

This is the second frame I've drawn. I'm beginning to see how 2D animation is said to be a very slow process. I suppose it doesn't have to be, but the temptation to erase and adjust and redraw, and add more detail, sure slows things down. Now I wonder how long a professional animator is given to draw each frame or clip when they work for a studio.

Perspective is becoming the biggest challenge for me at the moment - getting the feet in the right place, getting the position of the shoulders and hips right. It's easy enough to draw a set of hips and shoulders when the positioning doesn't matter, but when animating, the positioning must be very precise to show the right movement. We'll just have to see how well I can do.

I hope next time I can show some movement!
Posted by Tobias at 09:51 No comments:

The Finger and the Moon

I'm married now, so it's back to animation practice:

It's finished! Well, I'm ready to move on to the next project. Like anyone else creative, I could easily spend the next decade making tweaks, but then I'd only have this.

I learned quite a lot.

There's a huge value in getting the key poses down properly. Make them as striking as you can, and then make them twice as striking, and then a little more.

Also, the principles of squash and stretch, and follow through, are so powerful. The extra whipping of the character's fingers really transforms the piece. It becomes more compelling. I learned a lot about secondary action, but this is something else. Meta-action? The action of the actions.

I'm excited to use what I've learned in the next project.
Posted by Tobias at 05:32 No comments:

Don't Concentrate On The Finger!

I've been working on this for some time, mostly in the mornings. It's coming into fruition now.
So this isn't the first time I've tried to animate from this clip:

This clip shows the quality of my work from the beginning of my Master's Degree.

I noted before in the last post that my work here in SK as a teacher has unlocked an ability to create more compelling key poses, and I think this is evident when watching these two clips.

This was one of my better pieces of work from the past. Personally, I think my new work still comes in at a quality level above this, which is quite something since I was practicing a lot more back at that time. I've put a greater emphasis on making bold key poses, and even purposefully overdoing them to get that cartoon feel. I was careful this time to check the curves so that body parts moved relatively smoothly unless necessary. I was careful to preserve circles that real human body parts tend to move in - a feature of inertia.

I think there is still room to improve my new work, but it's a step in the right direction for sure!
Posted by Tobias at 23:20 No comments:

I haven't posted for a while, and honestly, I haven't made anything for a while. But I'm happy to announce that that's no longer true. I actually have two things to show you.

One of them is this:

It's what the Bruce Lee animation I did those years ago wished it could have been. It's important because it reflects a development both in my skills as an animator and personally.

As I've been in Korea as a teacher, I have had to adapt to the role expected from me. This means I have had to learn how to stand at the front of a room, draw attention and project my voice, from those who have the shortest attention span, kindergarten children - and across the language barrier too!
This version of myself stands as a stark contrast to the Tobias who went to school at Nottingham Trent, a much quieter, more reserved human without the capacity to wave his arms around.

I've learned how to become a caricature of myself. This is important because now I can produce the poses with my own body, I am able to draw them. Now I can demonstrate the actions, I can animate it! It's amazing, this connection. Perhaps some people have the capacity to model their poses purely from imagination, or from elsewhere, but I find that the kinasethetic approach of performing these actions yourself gives you an insight into how they work that pure imagination and observation don't.

I am grateful for this opportunity to come out here, because even though I've been working in a field unrelated to my animation, my skills have continued to develop. I can honestly say that I'm a better animator than I have ever been before.

And yes, I do have clips of it I can show, but I'm going to wait until at least all of the first major pass is complete before I put it up. Watch this space.

This is the second thing I will show you this time:

Whilst I was animating the Bruce Lee clip, I kept thinking how it would be nice to make something of my own again. I thought about cartoons I like to watch, cartoons I would like to watch, and also what it is that draws me to animation and storytelling.

I realised that the most compelling thing for me is to have a world filled with adventure, of old things to rediscover, and new things to find for the first time. I felt that it was a nice idea, but that's only the feel of the cartoon, at most an overall theme. It's not a story on it's own, so I can't really tell it.

I began to wonder what possible stories I can tell in a world with such a feel to it. I reached out to the internet to find out how the stories from my favourite cartoons were made, and they told me something I remember from my time studying for my MA:

This tells me that I don't need a specific story to make a start. In fact, knowing this, it becomes more important to define the world so that I know what stories are apt to happen within it.

So, with this as a starting point, I made this character. A story needs a protagonist, so here one is.
He's a frog, going by the name of Geggle. He's got a good heart, but he's inexperienced. He's not content with simply swimming around in a pond like the other frogs. He'd sooner be like the heroes he's heard of and read about in books.

I think I'm going to try 2D animation this time. I always wanted to try it, since my favourite cartoons have all been 2D. I'll be sure to post up how it goes!
Posted by Tobias at 04:24 No comments: