Just having a little problem working through this animation.
I'm going through the blocking pass phase, which more or less involves changing stepped curves into smooth curves and seeing what's up, and I'm presented with this issue. Prepare yourself for a lightning fast video: 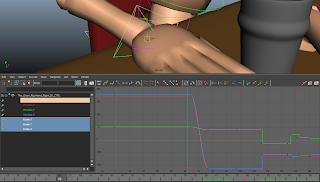 Underneath is a screenshot of the curves. This is very weird because I expect the curves to be going crazy but they're quite well composed.

I suspect it's a case of the curves not being properly synchronised with each other. Either that or it's the typical thing where the controls have managed to go all the way around such that you can't tell.


Edit: further inspection proves that it is indeed the latter issue. These 3D programs do like to play their tricks.

Edit Edit: Actually, it's not gone away!

Edit Edit Edit: Ok, so what's going on is, usually when you rotate the axis are set at sensible, even distances from each other. Currently the Z axis is very close to what the X axis is moving at, meaning there is no side to side rotation available on its own. This causes this dumb issue. I think this is what's called gimbal lock.

Edit Edit Edit Edit:
The handy book called 'How to Cheat in Maya 2012' actually contains a solution to this problem. Rotation in 3D is handled in a particular order, and part of the result is that gimbal lock only occurs on the middle axis in this order. If you know which axes are going to rotate the most, you can change the order of rotation in Maya to shift the locking gimbal to the least rotated axis, which can help to shift the issue.
Posted by Tobias at 11:13