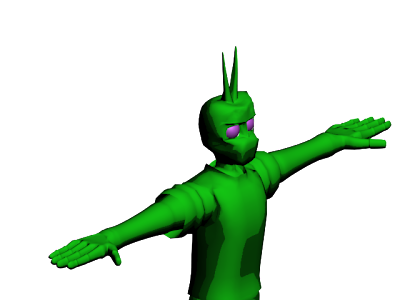 Here is my Morpheus.

Rendered with falloff, although only trying it will tell if it works with a map.

He's also been tesselated and smoothed, which I think does look better than without. I shall be sticking with it.
Posted by Tobias at 14:17 No comments:

Well, my computer wasn't doing very well so I gave it a fresh install of windows.

This means I have to get 3ds max again, which is taking a long time...
Posted by Tobias at 12:28 No comments: 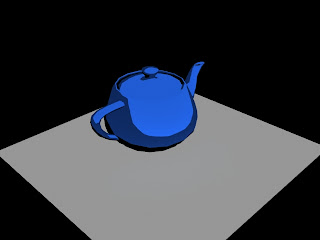 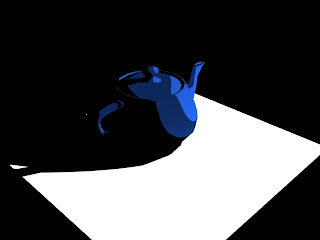 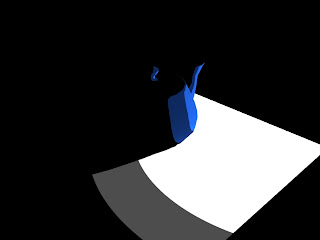 This is the result of using falloff to get a cel-shading effect.

The problem with this method is it's difficult to get the cel-shading's typical outline. However, you can get a bit of outline, which with this method doesn't appear on a highlight, but appears in the shadow. 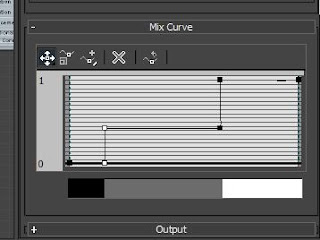 You can add levels using the falloff tool. If you keep the darker colour as black, and set it so the black level is very small, as in the picture above, it creates a black line in the shadow area. If you make the level bigger, it makes the line thicker in places.

The problem is the background. This method uses self illumination, and self illumination doesn't lend itself to shadows. To cover this, you need to put a falloff shader on the floor too, which will work with shadows.
Posted by Tobias at 12:26 No comments:

According to Autodesk, there is a bug in the slate material editor that prevents any kind of delete command from workin whilst it is open. So you must maximise it and close it, or open it again and close it, and then it work!
Posted by Tobias at 12:09 No comments:

A tutorial on how to create a cel shading effect which promises to be faster rendering than the ink n paint shader.

According to the tries in uni, this technique works, but the technique for creating the outline doesn't. It does produce a cleaner and faster rendering painted look, but getting the outline to work might need a bit more playing with.
Posted by Tobias at 16:22 No comments: 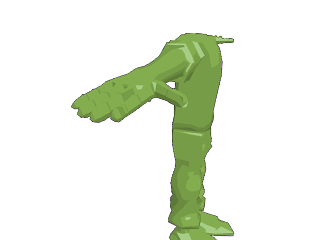 I made a hand! Which means thanks to symmetry I made two!
Posted by Tobias at 15:07 No comments: Q&As:
Where can I get that delicious meal?

That's Chilli Chicken Ramen, adapted from Chilli Beef Ramen in the Wagamama cookbook.
Seeing as it's theirs, with little input from myself, I can only recommend you buy the book. This meal alone makes it worth it.

What's that video in the background?

That would be the Inspired Brakeless 2010 roadtrip video.
Get yourself over to Cleanzine to watch it for yourself. I couldn't do half that stuff, and I have brakes on my bike!
Posted by Tobias at 16:24 1 comment: 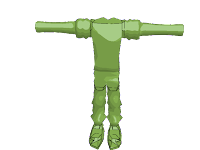 I'm using an ink n paint shader. The ink is weird though, you can see it's inked all over the feet, but not in the folds on the clothes. It doesn't change when you move the view around either.

If I can't fix this with modelling, I shall have to draw my own ink in on a map.
Posted by Tobias at 15:10 2 comments: Ok, I had a little look for what to do for outside lighting, and found the answer in the form of a direct light. It worked!
Now with a light positioned correctly I can slap some lens flare on there, and complete the effect. I'm pleased with that, for a quick mess-around.
Posted by Tobias at 00:43 No comments: Here is a quick render of a piece of terrain.
I've applied DoF using a camera. I know I could make it look even better if I could get it lit nicely with some lens flare in the background, but what can I say... lighting is a nuisance.
Posted by Tobias at 00:04 No comments:

Jonny mentioned a modifier called tesselate, which he said puts more polys in without also smoothing the model. This could be the answer I'm looking for!


Also, as for soundtrack, I realised I could make a reasonably convincing guitar using Reason 4.
Now, this could save me the effort of recording countless unsuitable clips, but it would also take away from the magic of a completely home-made piece of animation. Decisions...

I finally got round to giving Unholy Confessions by Avenged Sevenfold a proper go. A friend suggested I learn this back when I had been playing for 6 months, and I never really tried.

I am really enjoying riding my Ciguena. It's like meeting an old friend, only you sold your first one and bought someone else's later.
I worry that I might not like the feel of my Because. I might even be tempted to get rid of it!
Posted by Tobias at 00:25 No comments:

T shapes of my characters 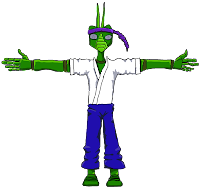 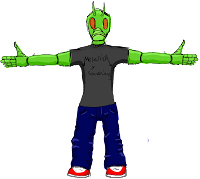 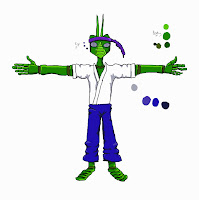 White top, jeans and a purple bandana!
Posted by Tobias at 11:54 No comments:

This is a t-shaped Morpheus character.
Undecided on the outfit colour, I could leave it white like a karate outfit, but I could colour it in like a hippie outfit, which would change how the character lends itself to the narrative.
Posted by Tobias at 11:02 No comments:

This is part of the development of my morpheus character.
He still looks reasonably like a praying mantis, I think.

Also the first real go of my new wacom bamboo tablet!
Posted by Tobias at 22:10 No comments: