I finished my pixilation project.
The video is to the track Twice by Little Dragon.
Video to come soon!
Posted by Tobias at 14:08 No comments:

The project I'm working on at the moment is pixilation. 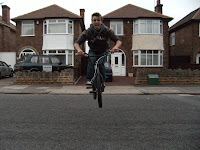 This is a frame from my project, entitled 'Hoverbike'.
Yes... It's not been easy. Bunnyhopping so many times wears you out, that's for sure. What's frustrating is the amount of time it takes to do it, the fact I've got not much time to do it in, the fact my brother's not avaliable much for taking the pictures, and most importantly the fact the first few photos have come out RUBBISH!
Posted by Tobias at 18:41 No comments:

I wrote a song.. I still think there needs to be a couple more lines, though.
I've got the music to go along with it, but an attempt at miking up my amp failed - the microphone could pick up the sound of the metronome, despite the fact that sound came out through the headphones only. Very strange.
I'll post it up if I get round to recording it, but don't expect me to sing!

Edit: scratch that, I've blown my line in on my computer. No recording for me.
Posted by Tobias at 20:32 No comments:

I bought a video camera early this year... and it's taken me this long to get the piece I needed to let me upload my videos. Looking forwards to getting stuck in to video editing now. Keep your eyes peeled, expect some kind of riding video to turn up here soon.
Posted by Tobias at 00:46 No comments:

At Uni today, I found myself in a group of 6 people.
The task - create a 10 second 12fps animation using a whiteboard, a pen and a camera.
The plot - move a box from one side of a house to another.
The plan - we chose to have a large diglett shaped monster grow a hand, pick up the box, attempt to eat it and then spit it out to the other side of the house.
The result - I may post the video up at some point. It started off well, and decsended into chaos, with such additional features as a meteor that landed on the house, a plane that turned into a bird, that landed on the house... a car that rose from the ground, as well as a plant that grew into a flower that turned firstly into pacman and then into a yin-yang and then into a black hole.

Welcome to my blog

Hi, this is my blog. I might end up using this a lot, or not, who knows. It should be good for keeping track of the work I'm up to, we'll just see if to makes it into routine or not, ha.
Posted by Tobias at 13:12 No comments: